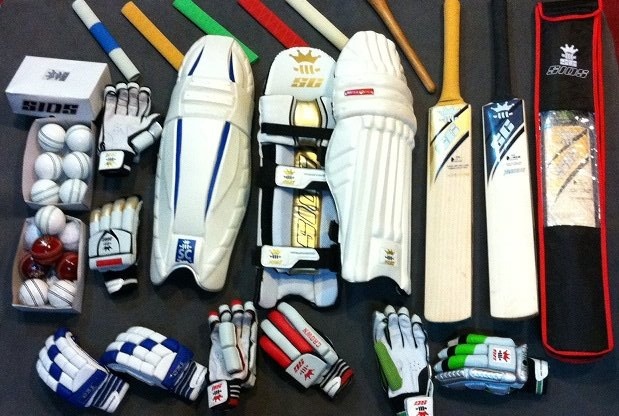 The pitch is 22 yards (20 m) long between the wickets and is 10 feet (3.0 m) wide. It is a flat surface and has very short grass that tends to be worn away as the game progresses. The “condition” of the pitch has a significant bearing on the match and team tactics are always determined with the state of the pitch, both current and anticipated, as a deciding factor.

Each wicket consists of three wooden stumps placed in a straight line and surmounted by two wooden crosspieces called bails; the total height of the wicket including bails is 28.5 inches (720 mm) and the combined width of the three stumps is 9 inches (230 mm).

Four lines (aka creases) are painted onto the pitch around the wicket areas to define the batsman’s “safe territory” and to determine the limit of the bowler’s approach. These are called the “popping” (or batting) crease, the bowling crease and two “return” creases.

A wicket consists of three stumps that are hammered into the ground, and topped with two bails.

The bat is made of wood and has the shape of a blade topped by a cylindrical handle. The blade must not be more than 4.25 inches (108 mm) wide and the total length of the bat not more than 38 inches (970 mm).

The ball is a hard leather-seamed spheroid projectile with a circumference limit of 9 inches (230 mm).

The game on the field is regulated by two umpires, one of whom stands behind the wicket at the bowler’s end, the other in a position called “square leg” which is several yards behind the batsman on strike.

Off the field and in televised matches, there is often a third umpire who can make decisions on certain incidents with the aid of video evidence.

The innings (always used in the plural form) is the term used for the collective performance of the batting side. In theory, all eleven members of the batting side take a turn to bat but, for various reasons, an “innings” can end before they all do so (see below).

The bowler bowls the ball in sets of six deliveries (or “balls”) and each set of six balls is called an over. This name came about because the umpire calls “Over!” when six balls have been bowled. At this point, another bowler is deployed at the other end and the fielding side changes ends. A bowler cannot bowl two successive overs, although a bowler can bowl unchanged at the same end for several overs. The batsmen do not change ends and so the one who was non-striker is now the striker and vice-versa. The umpires also change positions so that the one who was at square leg now stands behind the wicket at the non-striker’s end and vice-versa.

After approval from the 10 Test nations, bowlers will be allowed to straighten their arms to 15 degrees All bowlers are classified according to their pace or style.

The classifications, as with much cricket terminology, can be very confusing. Hence, a bowler could be classified as LF, meaning he is a left arm fast bowler; or as LBG, meaning he is a right arm spin bowler who bowls deliveries that are called a “leg break” and a “googly”.
During the bowling action the elbow may be held at any angle and may bend further, but may not straighten out. If the elbow straightens illegally then the square-leg umpire may call no-ball. The current laws allow a bowler to straighten his arm 15 degrees or less.

At any one time, there are two batsmen in the playing area. One takes station at the striker’s end to defend the wicket as above and to score runs if possible. His partner, the non-striker, is at the end where the bowler is operating.

Batsmen come in to bat in a batting order, decided by the team captain. The first two batsmen – the “openers” – usually face the most hostile bowling, from fresh fast bowlers with a new ball. The top batting positions are usually given to the most competent batsmen in the team, and the non-batsmen typically bat last. The pre-announced batting order is not mandatory and when a wicket falls any player who has not yet batted may be sent in next.
If a batsman “retires” (usually due to injury) and cannot return, he is actually “not out” and his retirement does not count as a dismissal, though in effect he has been dismissed because his innings is over. Substitute batsmen are not allowed, although substitute fielders are.

A skilled batsman can use a wide array of “shots” or “strokes” in both defensive and attacking mode. The idea is to hit the ball to best effect with the flat surface of the bat’s blade. If the ball touches the side of the bat it is called an “edge”. Batsmen do not always seek to hit the ball as hard as possible and a good player can score runs just by making a deft stroke with a turn of the wrists or by simply “blocking” the ball but directing it away from fielders so that he has time to take a run.

There is a wide variety of shots played in cricket. The batsman’s repertoire includes strokes named according to the style of swing and the direction aimed: e.g., “cut”, “drive”, “hook”, “pull”, etc.

Note that a batsman does not have to play a shot and can “leave” the ball to go through to the wicketkeeper, providing he thinks it will not hit his wicket. Equally, he does not have to attempt a run when he hits the ball with his bat. He can deliberately use his leg to block the ball and thereby “pad it away” but this is risky because of the lbw rule.

In the event of an injured batsman being fit to bat but not to run, the umpires and the fielding captain may allow another member of the batting side to be a runner. If possible, the runner must already have batted. The runner’s only task is to run between the wickets instead of the injured batsman. The runner is required to wear and carry exactly the same equipment as the incapacitated batsman. It is possible for both batsmen to have runners.

The primary concern of the batsman on strike (i.e., the “striker”) is to prevent the ball hitting the wicket and secondarily to score runs by hitting the ball with his bat so that he and his partner have time to run from one end of the pitch to the other before the fielding side can return the ball. To register a run, both runners must touch the ground behind the crease with either their bats or their bodies (the batsmen carry their bats as they run). Each completed run increments the score.

Hits for five are unusual and generally rely on the help of “overthrows” by a fielder returning the ball. If an odd number of runs is scored by the striker, the two batsmen have changed ends and the one who was non-striker is now the striker. Only the striker can score individual runs but all runs are added to the team’s total.

The decision to attempt a run is ideally made by the batsman who has the better view of the ball’s progress and this is communicated by calling: “yes”, “no” and “wait” are often heard.

Running is a calculated risk because if a fielder breaks the wicket with the ball while no part of the batsman or his bat is grounded behind the popping crease, the batsman nearest the broken wicket is run out.

Additional runs can be gained by the batting team as extras (called “sundries” in Australia) by courtesy of the fielding side. This is achieved in four ways:

There are ten ways in which a batsman can be dismissed and some are so unusual that only a few instances of them exist in the whole history of the game.

A batsman may leave the field without being dismissed. If injured or taken ill the batsman may temporarily retire, and be replaced by the next batsman. This is recorded as retired hurt or retired ill. The retiring batsman is not out, and may resume the innings later. An unimpaired batsman may retire, and this is treated as being dismissed retired out; no player is credited with the dismissal. Batsmen cannot be out bowled, caught, leg before wicket, stumped or hit wicket off a no ball. They cannot be out bowled, caught, leg before wicket, or hit the ball twice off a wide. Some of these modes of dismissal can occur without the bowler bowling a delivery. The batsman who is not on strike may be run out by the bowler if he leaves his crease before the bowler bowls, and a batsman can be out obstructing the field or retired out at any time. Timed out is, by its nature, a dismissal without a delivery. With all other modes of dismissal, only one batsman can be dismissed per ball bowled.

An innings is closed when:

If the team that bats last is all out having scored fewer runs than their opponents, the team is said to have “lost by n runs” (where n is the difference between the number of runs scored by the teams). If the team that bats last scores enough runs to win, it is said to have “won by n wickets”, where n is the number of wickets left to fall. For instance a team that passes its opponents’ score having only lost six wickets would have won “by four wickets”.

In a two-innings-a-side match, one team’s combined first and second innings total may be less than the other side’s first innings total. The team with the greater score is then said to have won by an innings and n runs, and does not need to bat again: n is the difference between the two teams’ aggregate scores.

If the team batting last is all out, and both sides have scored the same number of runs, then the match is a tie; this result is quite rare in matches of two innings a side. In the traditional form of the game, if the time allotted for the match expires before either side can win, then the game is declared a draw.

If the match has only a single innings per side, then a maximum number of deliveries for each innings is often imposed. Such a match is called a “limited overs” or “one-day” match, and the side scoring more runs wins regardless of the number of wickets lost, so that a draw cannot occur. If this kind of match is temporarily interrupted by bad weather, then a complex mathematical formula, known as the Duckworth-Lewis method after its developers, is often used to recalculate a new target score. A one-day match can also be declared a “no-result” if fewer than a previously agreed number of overs have been bowled by either team, in circumstances that make normal resumption of play impossible; for example, wet weather.