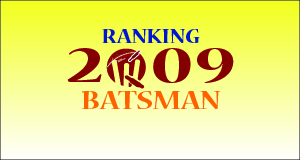 Well January is back, and so is the Fourth edition of Vineet’s Cricket Rankings (check out the ODI Batsmen Rankings 2008 here)! And though there are some surprises, the top of the heap is captured by none other than one of the most explosive cricketers of 21st century – Virender Sehwag!! However he was relegated to the second spot this time by a new star who took every team by storm. Tillekaratne Dilshan of Sri Lanka was the most explosive batsman on scene in 2009. He scored 1000 runs averaging 55.6 in just 19 matches and a strike rate of 103.2. Although he way beyond Sehwag’s strike rate of 136.6 but his astonishing average pipped Sehwag by miles. He smashed 4 centuries and 2 half-centuries on the way to achieving this.

He is followed by Virender Sehwag who scored 810 runs in just 20 matches at a nice average of 45.0 (lower than last year) at an extra-ordinary strike rate of 136.6 (much higher than last year)!! He smashed 3 century and 2 half-centuries on the way to achieving this. Not to be left behind, Sachin Tendulkar emerged like a Phoenix to finish 3rd this year scoring 962 runs in 21 matches at a very high average of 54 at a good strike rate of 94!! He smashed 3 centuries and 3 half-centuries on the way to achieving this. AB DeVilliers (AVE 54.4 SR 92.8), McCallum of Scotland (AVE 70.5 SR 89.5) and Chris Gayle (AVE 39.5 SR 117.5) follow at 4,5 and 6. So the year 2009 was heavily dominated by Indian Batsmen. South African batsmen to some extent also shone but were far away from the Indians, and the Australian Team trails at no. 3.