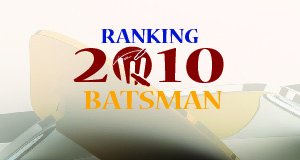 Well January is back, and so is the Fifth edition of Vineet’s Cricket Rankings (check out the ODI Batsmen Rankings 2009 here)! And though there are some surprises, the top of the heap is captured by none other than one of the emerging cricketers of South Africa- Hashim Amla!! He is followed by another South African – AB de Villiers! Going into the World Cup, South Africa is thus the best batting line up today!!! Amla was the most explosive batsman on scene in 2010. He scored 1058 runs averaging 75.57 in just 15 matches and a strike rate of 104.23. Although he way beyond Shahid Afridi’s strike rate of 144.12 but his astonishing average pipped the vacillating Afridi by miles. He smashed 5 centuries and 4 half-centuries on the way to achieving this. Sachin Tendulkar played just 2 matches and could not be considered for this ranking. However, he smashed an astonishing 200* and must be considered at the top of the heap.

But then who are the teams of 2010? Well South Adfrica is right there at the top with 5 batmsen in Top 14. And next are Indians and Pakistanis. India has 6 batsmen in top 30.