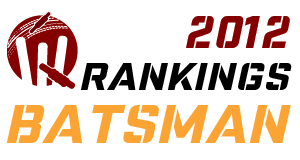 Nasir Jamshed (Pakistan) with some wonderful batting compiled 462 runs in just 8 matches to make the list at No 4. He averaged 66 at a strikerate of 86.19 and struck 2 centuries and 2 half-centuries. He was followed by Walting (New Zealand) who scored 338 runs in 7 matches with an average of 84.5 and a strike rate of 83.04. He scored 4 half centuries on the way.

But then who are the teams of 2012? Well India is way ahead of everyone with 5 batsmen in top 30! This is much lower than it’s 2011 performance of 7 batsmen in Top 30. England New Zealand Australia Sri Lanka and West Indies. So the competition is very hot right now. England and Australia with with their bowling performance keep ahead of the others.

We saw only de Villier maintain his form to the highest level. He’s made this 4 times consecutively, which makes him the most consistent Batsman of them all in the 2009-2012 period. Watch out for the next level between AB and Kohli!

And the Indians? India is way ahead of everyone with 5 batsmen in top 30. Virat Kohli continued his astounding form and Dhoni once again showed why he’s the Indian Captain. Raina Gambhir and Sachin continued being in Top 30.