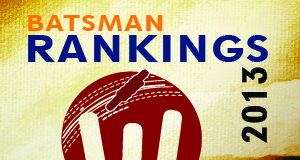 Shane Watson (Aus) with some wonderful batting compiled 693 runs in just 17 matches to make the list at No 5. He averaged 43.31 at a strikerate of 106.28 and struck 3 centuries and 2 half-centuries.

We saw de Villier continue to maintain his form to the highest level. He’s made this 5 times consecutively, which makes him the most consistent Batsman of them all in the 2009-2013 period. Virat Kohli also remained in Top 5! Watch out for the next level between AB and Kohli!

And the Indians? India is way ahead of everyone with 5 batsmen in top 30. Shikhar Dhawan is at the Top at #3. Virat Kohli continued his astounding form at No #9. Rohit Sharma and Dhoni are next.