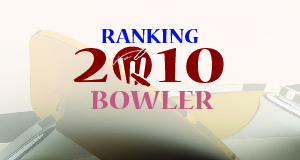 The ODI Bowler’s Ranking 2010 is out! in the Fifth edition of Vineet’s Cricket Rankings (Check out the ODI Bowler Rankings 2009 here)! And there are lots of surprises here, in fact, the bowling Top 30 almost got entirely revamped with a lot of new bowlers coming in. The small teams are leading possibly because of low scores in their matches. However, not to take away credit from their bowlers, we saw Kenya dominate the bowling attack for the first time in 4 years!! New Zealand bowlers also bowled quite well to take 3 positions in Top 14.

Ryan Harris of Australia was 4th claiming 40 wickets in 16 matches at 15.17 runs per wicket and an economy rate of 4.63 rpo. Now this puts him right at the top of heap of serious cricket playing nations. He was nowhere in the picture last year. So this seems to be a good year for new Australian talent, with Hadin just having topped the Fielding charts!

Only Johnston of Ireland was in the Top 10. All others crashed out of the list, especially Mashrafe Mortaza who took just 11 wickets in 15 matches at an average of 45.0 and at 4.9 rpo!

Where are the Indians? Well after Munaf at 18, Ashwin is at 27. He claiming 14 wickets in 7 matches at 23.21 runs per wicket and an economy rate of 4.92. Want to know who are performing for India? Well here are the stats, and you can even share these with the BCCI: