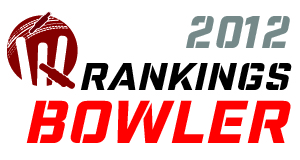 The ODI Bowler’s Ranking 2012 is out! in the Seventh edition of Vineet’s Cricket Rankings (Check out the ODI Bowler Rankings 2011 here)! And there are lots of surprises here, in fact, the bowling Top 30 almost got entirely revamped with a lot of new bowlers coming in. Bangladesh, Pakistan, Sri Lanka and West Indies did quite well to claim 4 spots in top 30. However, England, South Africa and Australia with 5 in Top 30 stood heads over shoulders above others. And England bowlers toppers Australian in 1 to 1. Hence England emerged the strongest bowling team this year.

All of the top 5 crashed out.

Where are the Indians? Well we have the Top 3 as Ashwin at 25, Vinay Kumarat 26 and Irfan Pathan at 39. Want to know who are performing for India? Well here are the stats, and you can even share these with the BCCI (assuming they don’t look at stats very often): (Since Amit Mishra did not play a single match this year after topping the list last year!!!!)