ODI Most Valuable Players 2009 (all teams) 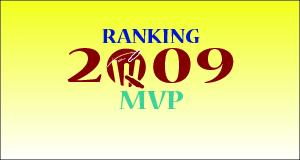 RN ten Doeschate is back and how! He just managed to play 5 matches and Topped the MVP list of 2009! He made this list almost entirely on his allround performance. He scored 364 runs in 5 matches he played, at a striking average of 81.98!! But wait, while bowling he took 9 wickets in 5 matches at an average of 22.77 RPW at a strike rate of just 29.2 balls to finish with an enviable economy rate of 4.67!! He also took 4 catches. What an awesome package!! He beat the likes of Shakib, Flintoff, Sehwag, Pollock, Afridi, Maharoof, Yuvraj, Kallis, Collingwood, and Gayle just like that!

Where are the 2008 Most Valuable Players?

Well most of them slipped into oblivion except Virender Sehwag who was visible on the radar.