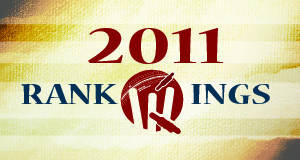 The 6th Edition of my Cricket player rankings are out! And you won’t be able to easily guess who is the Most Valuable Player!!
A Total of 359 players took the field in 2011 as against 366 in 2010 (this number is getting smaller every year for the last few years).

I have put out different ODI Ranking lists for teams and players. Do check each one out!

ODI Most Valuable Players All Rounders 2011 (all teams)

India finished at the top in the ODI rankings this year. India had a phenomenal year and they won matches without their main batsmen at times. They rose to No. 1 in ranking. They won 12 out of 16 matches they played. South Africa came at No. 2 followed by West Indies, England and Australia.

Sachin Tendulkar played just 2 matches in 2010. However, by scoring the all-time high of 200* he made it to the top of the heap as the most valuable player of any team. He had a strike rate of 134! He beat the likes of AB de Villiers, Kallis, Amla, Flintoff, Sehwag, Pollock, Afridi, Maharoof, Yuvraj, and Gayle just like that!