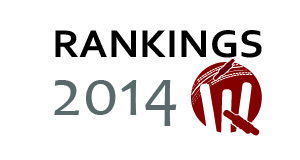 The 9th Edition of my Cricket player rankings are out! And you won’t be able to easily guess who is the Most Valuable Player!!
A Total of 392 players took the field in 2014 as against 338 in 2013 (this number got bigger but more teams were taken into account for this).

I have put out different ODI Ranking lists for teams and players. Do check each one out!

ODI Most Valuable Players All Rounders 2014 (all teams)

India finished at the top in the ODI rankings this year. India had a phenomenal year and they rose back to No. 1 in ranking. They won 14 out of 24 matches they played. South Africa came at No. 2 followed by New Zealand, Australia and West Indies.

AB de Villiers (SA) took place of Amla and continued SA dominance at the top of the table. He claimed the top spot with 879 runs from just 16 matches with a high average of 73.25 and a strike rate of 114.45. He smashed 2 centuries and 6 half-centuries on the way to achieving this.

A player from a minority team took the first spot for the first time in fielding! Cross (Scotland) took 18 catches in just 7 matches! to take the top spot. Wade (Aus) took 15 catches and 1 stumpings in 7 matches to come next.