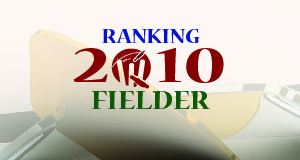 Brad Haddin (Australia) did well to fill in the shoes of Adam Gilchrist. He shot to the top of this list as he had 33 dismissals in just 16 matches with 31 catches and 2 stumpings. Sangkkara (Sri Lanka) did well to enact 31 dismissals though he took 17 matches to do that and could finish second with 27 catches and 4 stumpings. Paine moved out of sight getting replaced by Haddin. But his performance got him the 3rd spot as he got out 14 batsmen in just 9 innings with 14 catches no stumpings. Dhoni was a dismal 9th with 23 dismissals including 19 catches and 4 stumpings.

The best non-wicketkeeper fielder on the list was Ross Taylor (New Zealand) again this year taking 16 catches in 20 matches he played in 2010. Next best was Andy Strauss (England) with 11 catches in 14 matches.

Where are the Top Wicketkeeper/ Fielders of 2010?