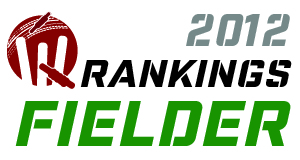 The Best Fielder was Walting (NZ) who took 7 catches in 7 matches and next best was Pollard (SA) who took 15 catches in 17 matches. 2012 obviously did not belong to the fielders 😉

Where are the Top Wicketkeeper/ Fielders of 2011?

Sarfaraz Ahmed did not play many matches and got dropped in favour of Umar Akmal who took to keeping like his brother! West Indies and Australia too found good replacements who ended up in Top 5.