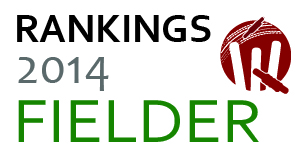 Where are the Top Wicketkeeper/ Fielders of 2013?

Kamran Akmal was left out and Sarfaraz made a return!