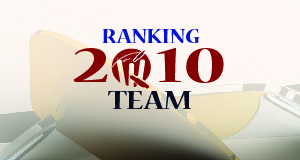 India had a phenomenal year and they won matches without their main batsmen at times. They rose to No. 1 in ranking. They won 12 out of 16 matches they played. South Africa came at No. 2 followed by West Indies, England and Australia.

Some interesting Team Stats for the Year 2010