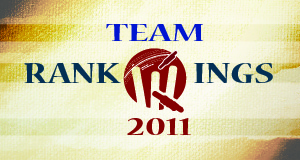 India again had a phenomenal year and they won matches without their main batsmen at times. They maintained their no 1 ranking based on their top 11 cricketer’s ratings. They won 21 out of 34 matches they played. South Africa came at No. 2 followed by Australia, West Indies and Pakistan.

Some interesting Team Stats for the Year 2011