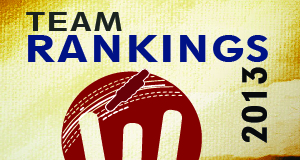 Even though South Africa had a bad win loss record they had the best set of players and were ranked as No 1. Although they won just 14 out of their 29 matches, they beat Austrailia to the No 1 spot. Australia came second and India came third. They were followed by Sri Lanka, Pakistan and New Zealand.

Some interesting Team Stats for the Year 2013